Details: I recently purchased a RAK 7243 gateway and have been trying different ways to install ChirpStack. My goal is to have the ChirpStack Application Server push data to a server using an HTTP Application Server Integration. I have had good success using using ChirpStacks Debian Quickstart. The data is sent to my node.js server and stored in a MongoDB database. It works very well.

Now I’m trying to do the same thing using a firmware image from RAK Wireless but I’m not able to get the Application Server HTTP Integration working. I am able to view data coming from my LoRa node using the Application Server web interface (using the device data tab) and I configured the HTTP Integration exactly the same as my other setup that is working but the data is not received by my server. Also, I’m using the same RPi for both tests. The only difference is the image on the SD card used to run the RPi.

Does anyone have any idea what the problem could be? It seems as if the PUSH isn’t working but I don’t know how to troubleshoot or fix that.

Did you add http integration by this way? 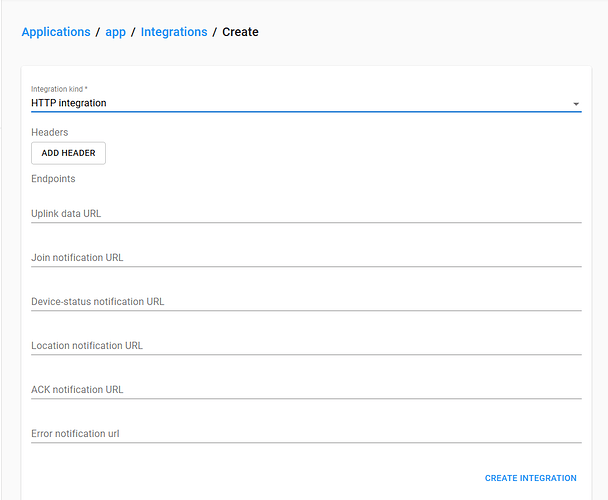 Yes - I specified HTTP Integration and the data URL.

Can you send me the picture of configure http integration!

This is the screenshot of the Integration page. 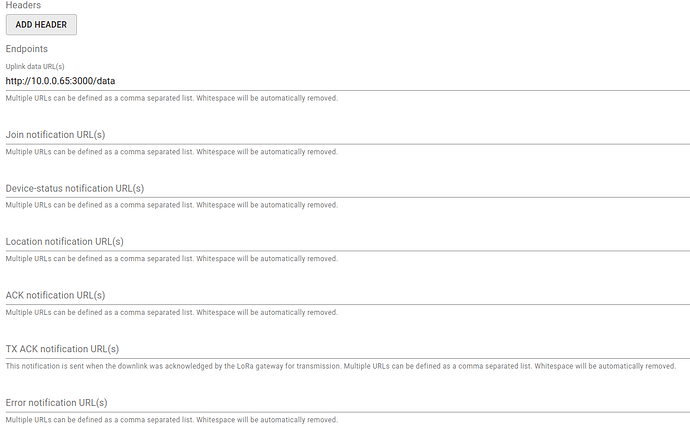 You need to fill in the URL for the subscription section you want.
uplink :It depends on your definition in the HTTP server. 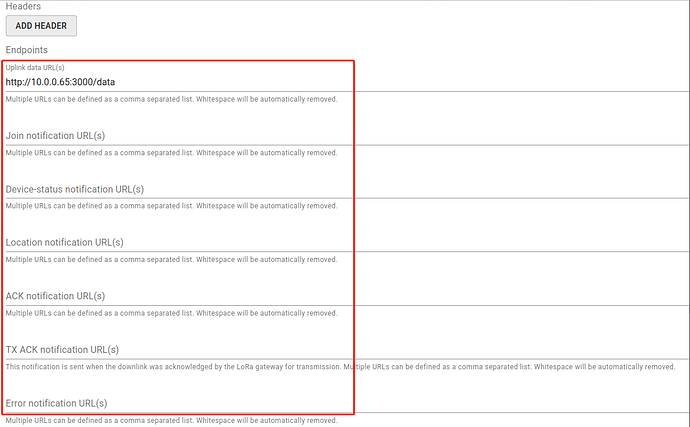 Thank you for your feedback. I don’t fully understand your comment.
Where do I specify the “subscription section”? I selected an HTTP
integration
(“Applications/neds_gnatApplication1/Integrations/http”) and the added
the URL for the server waiting for a HTTP PUSH request
(“http://10.0.0.65:3000/data”). Is there more I need to add? I’m pretty
sure this is the same setting I use with a ChirpStack Gate OS image on
the same RPi.

Is your server working? Can I try to configure HTTP services to upload to your server?

The server I am using at the moment is local so unfortunately it’s not
accessible outside my home network - sorry. I also have a server at:
https://ned-terrapin-server.herokuapp.com/data but that is set up to
send formatted packets to a database so I’m not sure if that would allow
you to upload. I don’t have much server experience.

I never used the Join notification URL in the past. Before the Uplink
data URL for the endpoint was all I needed.

You’d better fill it all out in the correct format and make sure the server is working!!!

This is very strange. I will look for the problem and get back to you later.

Both versions have been tested and are normal.
Can you see the version of the query you are using?