Hi everyone, I’m considering using wisblock for a relatively simple project…I think. A common problem we have (or me specifically!) is driving off with my toolbox door still open, and tools scattering across serveral km’s of road before being alerted by a passing vehicle that I have an issue…
So I’m wondering whether I could set up two (one for each box) magnetic switches, both connected to a digital input, and either power the unit via the ignition circuit somehow so it only alerts when the motor is running. Then when either digital inputs is open/closed, I could then actuate an alert/buzzer or similar to prevent me from driving off.
The other option would be the RAK 1904 (acceleration sensor) to alert me when I actually start moving.
I might also need a relay module?
I’d be interested in thoughts regarding this project, and if there are any suggestions of particular hardware to use (switches/buzzer), I’d love to hear them.
Thanks in advance.

Hi @Andy
For this I would go for

Ok, thanks @beegee, I have ordered the motion detection and other parts I need. What I’m more curious about is the alarm…do you have any thoughts as to what would be a good option?
I’m thinking that 3.3v would be too small, so a relay to a 12v might be more suitable. Hence the relay. I’m hoping something that could attach to the lid of the enclosure (RAKBox-B4 Outdoor enclosure) to keep it all together (excluding the magnet switches of course).
Something like this might be useful? https://www.jaycar.com.au/piezo-reversing-buzzer-4-16v/p/AB3464
And perhaps these switches. Security Alarm Reed Switch | Jaycar Electronics

Oh, this buzzer can be used for burglary alarms.
Not sure if it is loud enough, but you can check our RAK18000 Buzzer. It has only 75dB sound output at 10cm distance, but could be enough for your project.

We will have a bigger Base Board that has two IO slots. Then you could use the RAK13001 relay and the RAK13002 for the magnetic switch input. But to get this you need to wait a little bit with your project.

I hadn’t noticed the RAK18000 Buzzer, I’ll check it out…
I’m assuming I can’t use both IO’s on the board is because of the switched power?
I have had a board made up to attach to the baseboard which has a 1015 adc on it, so I shouldn’t have an issue with extra IO requirements. I could then use the bigger alarm if required with the relay.
If the 18001 as loud as a vacuum cleaner at 10cm, I’m in!

Not sure if it is that loud.The dBa are from the buzzer supplier. When I tested it, it seemed to be less. But I have no acoustic test equipment.

Sorry, my board would be of no assistance, as I need IO’s, but if I wire them in series I only need one. I don’t need to know which toolbox is open, I just need the alarm to alert me that either one is ajar. Is there anything I’m overlooking here? Be nice to see the bigger base board, I assume it will fit in the same enclosure?

For sure, that enclosure is HUGE, just had some of them here from a customer project. The current base board RAK5005-O fills only one quarter of the box.

What I really meant was would it still fit the existing standoffs etc in the box. Also line up with existing micro usb, n type etc etc…

Here is an image of the inside: 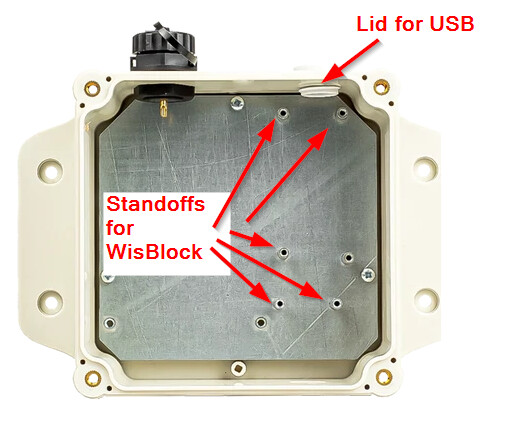 From the size it has enough space for all WisBlock modules.

I cannot attach the datasheet here, will send it to you directly.

For this I would go for

I’m not denying that this is a solution, but to me (if this was a feature that I wanted) I think that the motion sensor would be too late an indication; for example I could be pulling out into steady traffic and not actually be able to stop my maneuver to address the tool box.

I haven’t thought properly about how I would do it, but I think I would have something connected to the vehicle electrics so that it knows when the ignition is turned on, and then a simple magnetic switch on the boxes.

I’m not sure why you would want a relay in the mix, you’d only be signalling via a piezo buzzer or something similar.

If you don’t mind putting in some wiring it could all be done with one board, but I think I’d probably grab a couple of ESP01 boards for a few pennies (well a few $ at least) and have one on each box and then use a RAK11200 in the cabin for power detection and notification. The three could all commincate using ESP-MESH.

If you put together a small unit that you could put in any container (using an ESP01 for example) then you could just pop one into another toolbox (when you get one) throw it in the back of your van (so to speak) and Bob’s your uncle, it automaticall joins the mesh and you get notification about that box being open too.

I’ve only mentioned the ESP01 because you can pick them up really cheaply and they are nice and small. The ESP01 is in fact an Espressif ESP8266 chip, which is why I would pair it with a WizBlock RAK11200, because both the ESP32 (which the RAK11200 is) and the ESP8266 can communicate using the vendor’s ESP-NOW and ESP-MESH.

Thanks for the ideas @billr, and originally I wasn’t going to bother with a dev board at all, just run a 12v series circuit through the switches and buzzer, which would work ok. I want to use the project to learn more about the wisblock, as I haven’t used the accelerometer before. I have built weather stations and pressure transducers with them. The relay was because the buzzer I found on Jaycar needed 12v.
I have no knowledge of the ESP-MESH, but wouldn’t you assume it would also take a while to crank up? Might create the same issue going into traffic. I was planning to run the board on ignition power. I don’t think this would be an issue for me in particular (google Dirranbandi, my location). Not much traffic to speak of, but I see your point, we would want to be alerted quickly.

The ESP01 units can be battery powered, and they will spend most of their time in sleep mode, only waking when it’s toolbox is opened (magenetic switch connected to an interrupt pin for example), the receiving unit can be powered with a rechargable battery, so that when the ignition is on the battery gets charged, but because it (the wisblock) is powered by battery one could quite feasably have the mesh up continuously, so there would be no startup delay … I’ve not played around too much with ESP-MESH, so I don’t have any data on startup time etc., but the above solution could possibly mitigate that.