Issue: I’m testing maximum range with RAK811 shield for Arduino and getting a SF10 maximum uplink messages, but wanted to receive SF11 or SF12 for longer distances. The maximum range is about 200 meters. See the setup below.

Details: I can send you more details if you need

Sending a 15 byte payload every 3 seconds would put you in breach of TTN Fair Use Policy and, more important is illegal. Being marginal on exceeding duty cycle is one thing, this is like going at 1,000km/h outside a school with a 5km/h limit with sharp spikes on the front of the car and a plume of oil smoke coming out the exhaust. See:

Additionally any node transmitting at SF11 or 12 is required by LoRa Alliance rules to be restricted and commanded to use a lower data rate.

Not only is this absurdly too often, you’re probably asking it to transmit again before it’s done with the receive windows.

At SF 10 your packet takes around half a second and so there’s just time to check classic receive windows 1 and 2 seconds later.

But at SF11 it takes around a second and at SF12 two, so the receive windows won’t finish before you try to make it transmit again fortunately seeming to result in failure.

At slow spreading factors you need to be waiting full minutes between packets, maybe a fair chunk of an hour.

Sometimes people jump on the idea of LoRa before realizing that it’s too slow and limited for their needs.

@carlrowan I made the configuration you said but it stays the same. I also tried at+set_config=lora:dr:0 which according to this, it should enable SF12 / 125 kHz, but instead I’m getting an error. Thanks for your help.

BTW: @nmcc @cstratton Maybe I forgot to mention my goal of this test is to force the equipment at maximum. I’m not thinking about using this configuration in real environment.

To what end?? Apart from overlapping most of the transmissions, the RAK modules have all the certifications etc - all you are proving is the you can drain the battery rapidly whilst cluttering up the local radio waves, for various values of local including most of the western spiral arm of the Milky Way galaxy.

If you were to try anything to boost your confidence in your creation, it would be to put the node about 1km away from the gateway, set it to DR0 with ADR on and run out an uplink every 10 minutes - about 5 hours later you should see it settle to an appropriate DR.

As for the commands, turning ADR off doesn’t have anything to say about it setting the DR to 0. Maybe you have to set it to what you want.

@nmcc I mentioned that, the end was to know the maximum range. I was a little concern about the 200 meters outdoors, now I know this is normal.

About the command, if you look well, this is for DR (data rate) configuration. Which in my case (AS923), and according to the next table, dr = 0 should activate SF12. 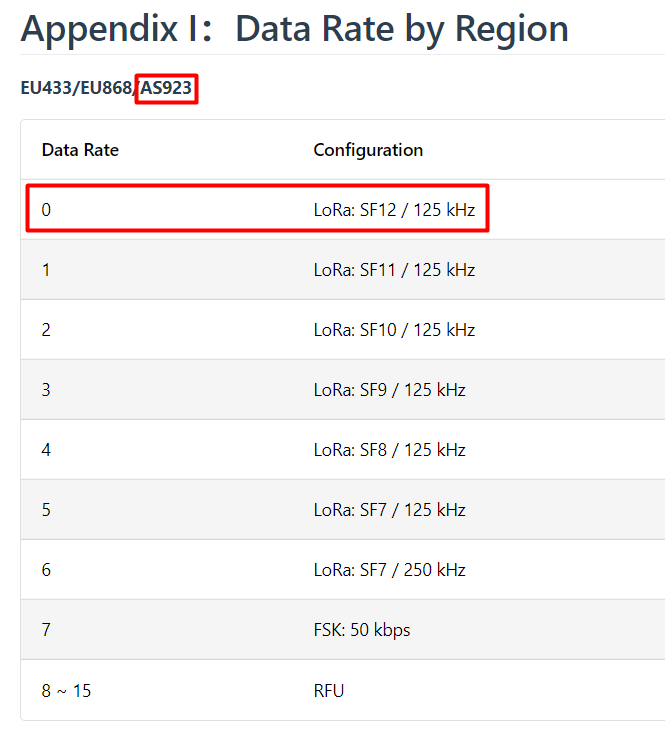 Thanks for the explanation.

I mentioned that, the end was to know the maximum range

That was a month ago, I’ve slept since

You can’t maintain SF11 or 12 on TTN as the LoRa Alliance requires networks to limit them due to the amount of airtime they use. And there will be a finite limit before v2 disconnects you (me & everyone else).

@carlrowan I’m using TTN V2, it has something to do? Because the board itself (serial configuration) is the one who doesn’t allows me to configure dr = 0. It just accept from dr = 2 (SF10).
About ADR, I tested both, on and off. Neither accept the command.
Finally, I’m using OTAA.

There’s a default datarate for that region based on LoRa Alliance specs. So you can’t set DR0 and DR1 for AS923.

@nmcc hey! I think this is the right answer after all.