I tried example environment_monitoring and it stopped sending sensor (BME680) values after a few hours. Gateway is in range and sensor did not move. It was powered from battery which had enough power. After reset, it started to send messages, then stopped after few hours again. I tried to add blinking led using millis() to know if program is working and led was always blinking, but not sending messages.

Does anybody know what could be the issue?

If you plug back the USB, do you get any output?

When I plug back USB, there is no output. It is set to send every 20 seconds, and after a few hours it stop. I have no idea what could be the issue.
SX126x-Arduino lib is version 2.0.9. All libs looks like the most recent.

Can you update the SX126x-Arduino to the most recent? Also make sure your BSP is the latest available.
When we started with the RP2040, there was a problem in the BSP with the timer functions. There was an overflow inside the functions that caused the timer to stop after around 1 hour => Ticker stops working after some time of use · Issue #235 · arduino/ArduinoCore-mbed · GitHub

Well, now i have SX126x-Arduino library version 2.0.10 and using WisblockRak11300 board version 0.0.6 which is the most recent. It did not solve the issue. Always stop sending after around 1 hour. Any other ideas? Could you please try it too?

You are using this example?

Yes exactly this example using OTA. I only changed keys. If needed, I can send some screenshots of lib manager and board manager… Anything that can help

I can confirm that the sending stops after ~4294 seconds

It should be fixed, but now I am wondering if it was missed.

Running now a test with my own example RAK11310-RAK1906.
It is made for PlatformIO, but could be used on Arduino IDE as well. Just needs to rename the main.cpp into .ino

The timer bug in the RP2040 BSP is back. Tested with another firmware and it shows the same.

Unless they fix it, the timer does not work longer than 4294 seconds, then stops.

I am running a test on the older BSP’s but it takes a long time. 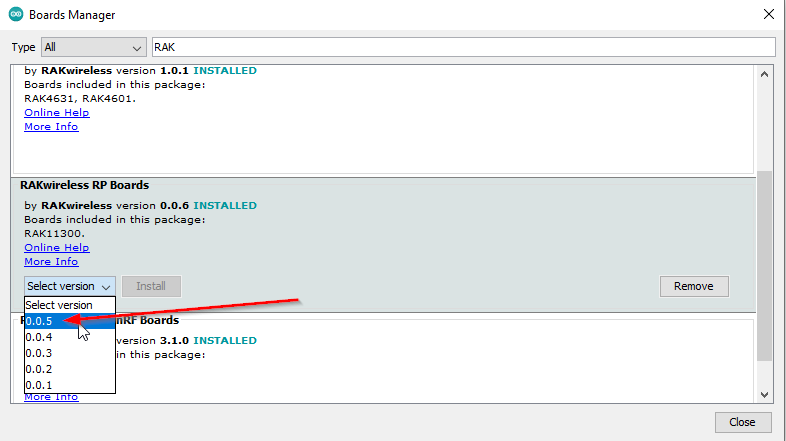 Sure I am going to do that now…

There is an error downloading it… 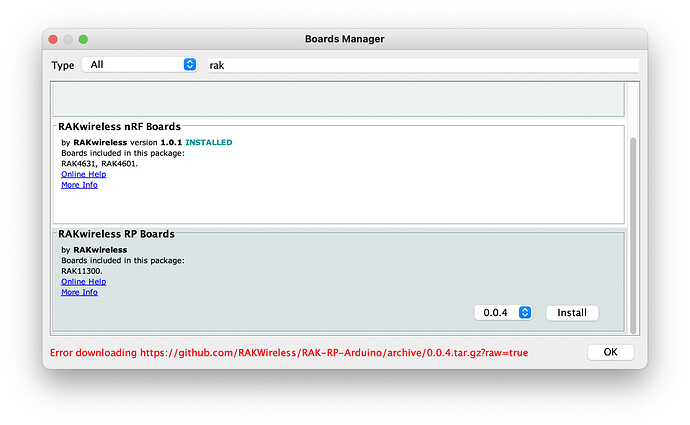 I just installed version 0.0.4 manually and trying… but now it is not incrementing frame counter. I don’t know why…

That example code was behaving different. It was changing spreading factor, too… Now I uploaded my little modified version, looks like it is sending correctly, but need to wait 2 hours to be sure.

OK, It looks like the timer bug is not in version 0.0.4 and it is still sending. bBut, there is now another problem. It is changing spreading factor from my initial SF7 to SF12 now. I see that in gateway and also I have set LORAWAN_ADR_OFF.