Issue: I have 5 sets of RAK4200-based devices. Rak4200 modules are connected to the chirpstack gateway running on the RAK5146 concentrator. All are Running on the AU915 region. After a few days of setting up the devices, it gives the error 96 and 94 as well on RAK4200 modules. But some modules are still working with the same configuration simultaneously. I have tried with the RAK serial port tool as well.

Setup: Rak4200 devices are connected to the serial port of the Atmega32u4 chip. the microcontroller is sending the packets every 10 seconds. Rak4200 is running on SF12 configuration. also, these devices are not very far away (about 20 meters apart). Gateway is connected to RAK 8dBi Fiberglass Antenna. and RAK4200 modules have 902-930 Mhz Rak 2dBi SubG Antenna. 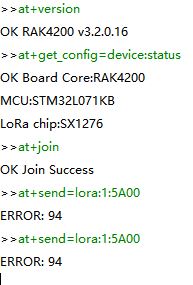 Did the module work before previously? Or it didn’t work yet?

Maybe you can try to lower the DR to 7? 20meters is not that far. Unless you have lots of obstruction.

Btw you should avoid sending payload every 10second to give chance to others to use the airwave. It likely violates usage of frequency in your region.

Yes. The module worked before. but suddenly it stopped after a few days of working.

I tried reducing the data rate but it didn’t help. Even if I take it near the Gateway it doesn’t work.

Currently, I am running only one device which is the one giving the errors.

Have you tried to re-register the device using different key/euis?

Yes If I reactivate a new device with different eui and etc. Then same hardware will work. But after few days later it will stop working. But I still don’t know what triggers the issue. Is there a way that I can increase RX timeout window?

RX window can’t be changed on old modules like RAK4200.

I do not know if you have access on the devices when it stops. Logs on gateway side and on the network side on what it receives from the device (if any) can be useful. Or maybe you can think of other things that could have possible change in the setup in the next few days. If the ADR is on, it might be a good idea as well to turn it off to remove as a variable.