Setup:
Hardware level:
Custom board: supply voltage = 3.3V, bypass capacitor is being used. Serial pins are connected directly to a microcontroller. Both microncontroller and RAK4600 have the same supply and voltage logic levels.
Serial configuration is the default: 115200 baud, 8 bits, no parity bit, and 1 stop bit.

Details: After the rising edge is generated, most of the times I receive an “OK Wake Up\n\r” immediately (I’m using a “spy” serial terminal to watch what’s going on in the serial lines), but sometimes this doesn’t happen and it takes several seconds (20-30) for the LoRa module to respond “OK Wake Up\n\r”.

The image below doesn’t show the issue (as there are not time marks) but illustrates my program “flow”.

I’ve checked the rising edge with an oscilloscope and it is always fine, even when the LoRaWAN module doesn’t respond immediately.

I’ll appreciate any suggestions to solve this issue.
Could this be a bug in RAK4600’s firmware?

EDIT: I have several custom boards and the issue happens in all of them.

Thanks for giving the details.

Hi @carlrowan,
Thank you for your answer.

Something I just realized is that I was assuming that the RAK4600 TX signal was staying HIGH in sleep mode, but this isn’t the case as the RAK4600’s TX pin has 0.0V in sleep mode. RAK4600’s documentation is clear with the RX pin, but not with the TX pin:

I assumed that this pin was in UART idle (HIGH), so I was configuring my MCU RX pin with a pull-up.

UPDATE:
I’ve spent several hours changing and testing this. My wake-up/sleep flow now looks like this:

The problem is still present, sometimes it can take up to 50 seconds for the RAK4600 to send “OK Wake Up”

By the way, RAK4600’s reset pin is not being used but it is connected to the MCU with the following circuit:

Things that are intermittent are harder to troubleshoot. If the issues don’t always happen or if the timing differs, it is harder to determine if it is FW issue unless we see some kind of pattern.

Btw, the MCU RX pin can be set as UART RX pin for the entire flow since it is still an input pin and in high impedance state.

I am confused on the part where the MCU will wait for “OK Wake up” or until the MCU reaches 2 seconds. If it escapes the 2-second mark, how were you able to measure the 50 seconds?

Also, have you tried giving more than one rising edge to wake up?

Thank you for your answer.

Btw, the MCU RX pin can be set as UART RX pin for the entire flow since it is still an input pin and in high impedance state.

Actually, about the MCU RX pin set as UART RX for the entire flow: this isn’t recommended by the MCU’s manufacturer since it can increase power consumption (compared to configuring the pin as GPIO) and my custom board is being powered from 2AA batteries, so any power optimization is necessary to achieve a long battery autonomy.
While the RAK4600 is sleep, the MCU should also be in sleep mode (low power) unless it is executing something else.

I am confused on the part where the MCU will wait for “OK Wake up” or until the MCU reaches 2 seconds. If it escapes the 2-second mark, how were you able to measure the 50 seconds?

The 2-second mark is to avoid blocking an MCU “process” waiting for a response (“OK Wake Up”) that might not arrive, so after 2-seconds the MCU gives a “TIMEOUT” response to an Android app that’s used to interact with my custom board (included RAK4600’s configuration). However, since I can’t cancel the waking up of the RAK4600, some seconds after the “TIMEOUT” response’s been sent to the Android app I still can see that the serial console (USB-UART converter) receives the “OK Wake Up” message.

I think that the issue is happening after N exact seconds from powering up the RAK4600. Besides that, I don’t have any clue. I’ll be doing some other tests to determine the value of N (if it’s fixed).

A workaround could be waiting for at least 60 seconds instead of 2 seconds.

I’ll be writing back anything I find.

Also, have you tried giving more than one rising edge to wake up?

Yes, I’ve tried multiple rising edges (2 and 3 rising edges with these characteristics: 2ms HIGH and 2ms LOW, sometimes 10ms in each state) with no success.

UPDATE:
I’ve tested using the RAK4600 Evaluation Board but the problem also appeared.
The setup used for the test was:
-Just the little board that’s soldered to the RAK4600 was used, the one marked in red in the image: 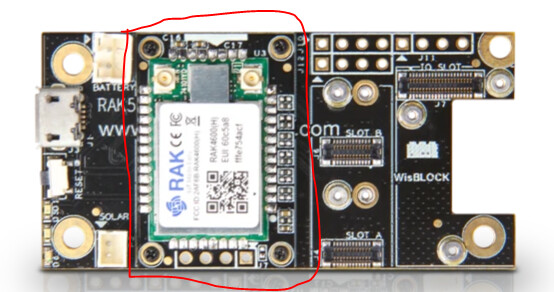 -I soldered wires to RX and TX pins of the RAK4600.
-Connected RX and TX signals to another board and powered the RAK4600 from the same board. This “board” is different than the one described in the initial question of the post.

So far I haven’t found any pattern in the problem. It just seems to happen at any time. However, in some tests I did, the problem seemed to appear after exactly 2 minutes of powering the RAK4600. But in other tests this didn’t happen so I can not get any conclusion from that.

Perhaps there is a newer firmware version I can try, and hopefully it’ll solve the issue? (considering is a RAK4600 firmware issue).

Here’s the link of the latest FW - https://downloads.rakwireless.com/LoRa/RAK4600/Firmware/RAK4600_Latest_Firmware.zip

You can try to upload it and do your test again.

Btw, I’ll just setup my own here too and try to replicate your issue.

Can you tell me the AT commands you are sending between wake up and sleep? So I will do that too.

I’ll just setup an arduino board to send those AT commands same to you. Hopefully, I can figure out something.

Thanks for your answer @carlrowan.

Here’s the link of the latest FW - https://downloads.rakwireless.com/LoRa/RAK4600/Firmware/RAK4600_Latest_Firmware.zip

You can try to upload it and do your test again.

I think is the same version I have installed, however, I will try to install the hex file from the link.

Can you tell me the AT commands you are sending between wake up and sleep? So I will do that too.

Hope that the steps are clear. Thank you for your help.

I confirm you issue. I will report this to the SW team and should look further into it.

I did a very simple test. I used a WisBlock board to send this sequence.

Every 2 minute mark, I will have 1 minute long no Ok Wake Up reply. You can have a look on that.

Btw, if you don’t need BLE functionality, you can consider to use RAK4270. This is based on the latest SX1262 LoRA RF chipset and STM32. This WisDuo module do not have this issue.

Hi @carlrowan,
Thank you for helping me diagnose the issue.

I really hope the issue isn’t difficult to solve.