RAK7268 not working out of box

I just received a RAK7268 (non-LTE). It was not working out of the box; I tried to set it up as a lora basics station with ttnv3, but it just constantly connected and disconnected. I have now upgraded the firmware to 1.2.3_RAK rRAK-a6e14b0 and I get errors in the system log indicating that the concentrator cannot start:

I have reset the configuration to factory settings, and then set the frequency plan to AS923. Finally, I registered the gateway on TTN according to this guide: RAK7268 Supported LoRa Network Servers | RAKwireless Documentation Center

The gateway does show up on TTN and then disconnects quickly after:

Could you please help me understand what I am doing wrong?

I just started mine yesterday without issue. The only difference is that I’m in Europe so I have an EU868 version (non-LTE too). 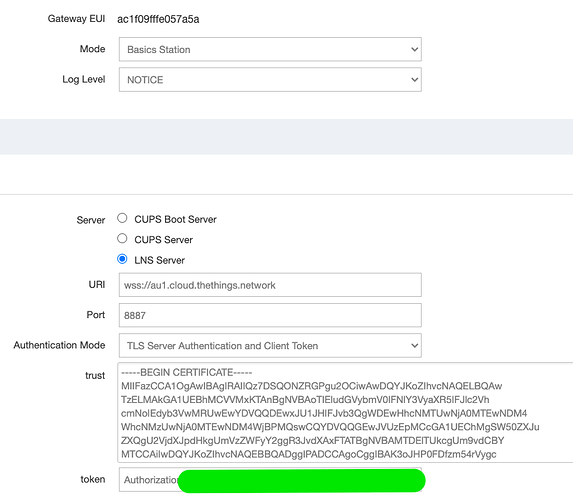 My device doesn’t allow me to select EU868, but I tried US902 and it gives the same error.

I just tried to reset the configuration again, and with the blank configuration the gateway does come up. However, once I enable the “Basics Station” mode (without changing any other settings, even leaving the password as the default), the same error in the logs come back. So it seems that the web interface is generating a broken configuration internally?

I am not sure of the best way to report this bug to RAK, but I’m guessing I need to send an email to them.

FWIW I also have several other gateways (RAK7258, RPi based, etc) that are working fine with AS923 and TTNv3.

If you’re saying it works in a classic packet forwarder mode (vs basicstation) a log of that would be interesting.

I just checked however, and the legacy packet forwarder does work:

In terms of what’s in your logs, on the one hand an SX1302 chip seems like it’s being found and configured, but on the other, the packet forwarder process seems to be stopping and restarting a lot, which doesn’t look good.

It sort of looks like something’s sending SIGTERM (signal 15) to both loraserver and the packet forwarder - or was that you changing modes?

Another way of putting it would be that it might be useful to see if you can leave it running for 10-15 minutes and get some node uplink packets (or join requests) to show in the log, nevermind if they don’t trigger a response it would just be to make sure the radio was really stable.

Also if there are issues with the Internet connection that could be upsetting it.

If you have a look in the full gist log I linked, it shows a bunch of errors related to parsing the configuration file in the basics mode before going into the restart loop. So I’m almost certain that is the issue here.

Yes, the exit code was me changing modes.

Internet connection is not the issue, I have another lora basics station (RPi based) a few meters away on the same connection and it works fine.

Just to add to this, I have been running the gateway with the UDP packet forwarder for the last few hours (including with real traffic on AS923) and it has been working fine. So it definitely seems that there is something wrong with the basics station server or configuration.

Just to be just sure (I made this mistake with my gateway) : for the token field, do you put a space between “Authorization:” and the token ?

Yes, I did have a space.

if it could be useful, me too I am facing the same issue on my RAK 7258/7268 gateway fleet installed in the field.

The basic station configuration led to this log error:

If I unplug the gateway and then plug it again, the gateway in basic station mode starts working for a while, but then the error comes up and the gateway does not forward packets anymore.

if it could be useful, me too I am facing the same issue on my RAK 7258/7268 gateway fleet installed in the field.

Hi, like jeremy, can you send a screenshot of your configuration ? 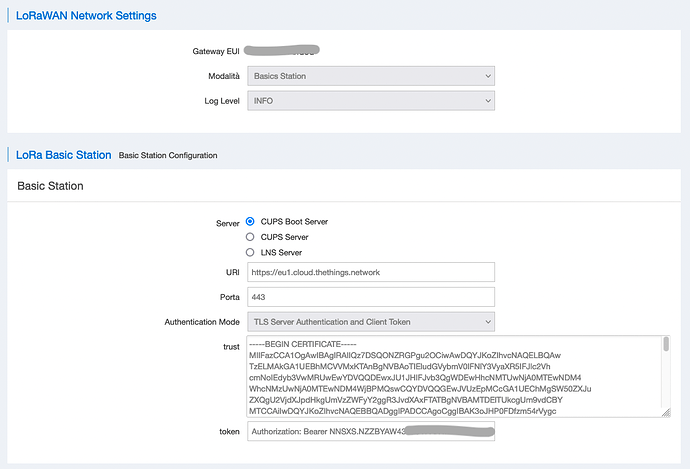 The gateway are attached to WisDM.

But if you want to use all features of basic station with CUPS server mode, the uri should be https 443.
Ref: Configuration and Update Server (CUPS) | The Things Stack for LoRaWAN

The configuration in the screenshot above, actually works.
What I do not understand is the unpredictable error message

that make the gateway stop receiving and forwarding messaging.

Some gateways are still up and running, but several others gateways shows this error and rebooting the device is not enough to fix it. I have to unplug the power supply and the plug it again

Can you DM send me full log of the gateway, as I cannot reproduce this issue.

Hey @jeremy
Did you find a solution to this problem. I am seeing the exact same thing.