Hello guys,
for some reason i do not see the option to choose EU433Mhz under channel settings. can someone please point me to how i can configure the gateway on this frequency?

Gateway Name: RAK7268C WisGate lite 2
Firmware version : 1.3.1
Tested with Local Network and TTN Basics with the same issue, i only see three frequencies to choose from:

As far as I know we do not offer a 433MHz model, are you sure yours is one?

Hello @Hobo
Thanks for the reply, maybe i miss understood things! To me i thought the semtec chips frequencies were software programmable, so they can be interchangeable and just require the right antenna for each frequency. Isn’t that the case?

Moving on to another question:

Basically 868mhz to 869mhz are forbidden for the moment and not allowed to transmit on those.
Thank you!
Jay

Yes and no, some are, some are not. also bands like are very far apart require a redesign, you can’t have the same filters, they can’t be tuned for both frequencies as they are too far apart. Thus you might have the same chip inside, but the model is different, cause other components are.
The frequencies in the RU868 are standard, so once set he should get the right set. If for some reason he needs something very specific, you can configure them separately, via the same interface page you showed.
Can you share the specific channels he needs to use, I will check them out for you.

Thank you for the explanation! I appreciate the offered help on the second question:
Basically the client said to not use the following frequency: 868mhz to 869mhz as they have something using those!

So how do i program that on the gateway and on the node! Because for the node side, i’ve tried to play with numbers in EU868.h from Semtech but the gateway doesn’t pickup the traffic so im sure im not doing this right ? 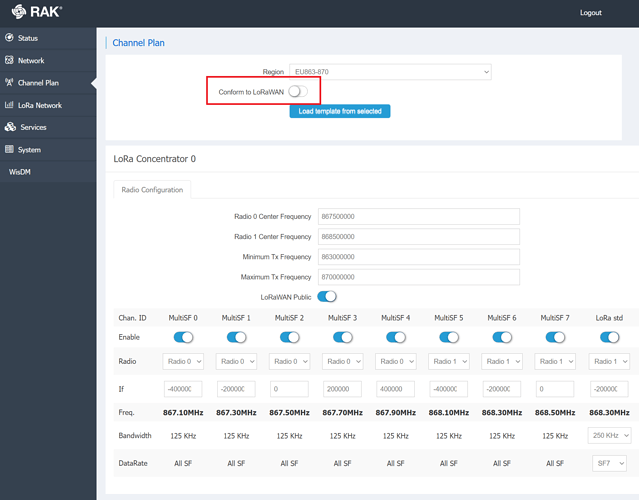 Make sure to turn the “Conform to LoRaWAN” option off in order to be allowed to set the frequencies manually.

Thanks for the updates,
but can you please share more specifically what i need to write on each channel? this is the screenshot of my channel plan. 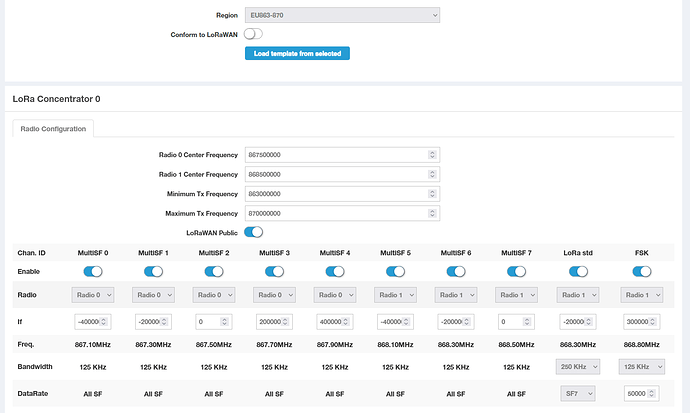 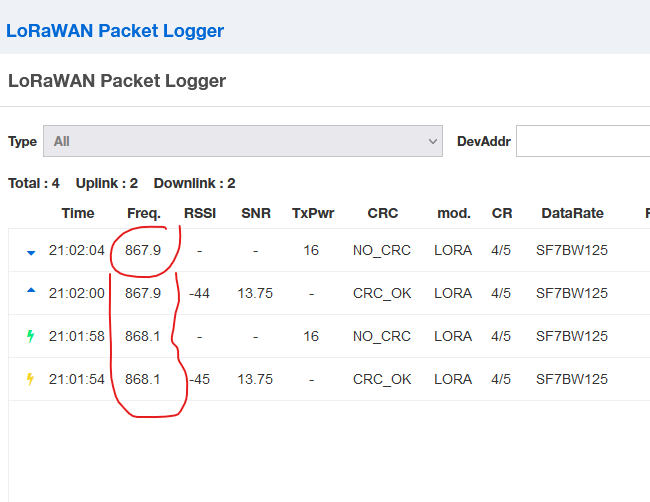 As I said you can’t have exactly what you want, you need to pick the central frequencies for your channels first.
Make sure you know these to begin with.

i did try these but it didn’t work, i see nothing on the Lora packet logger 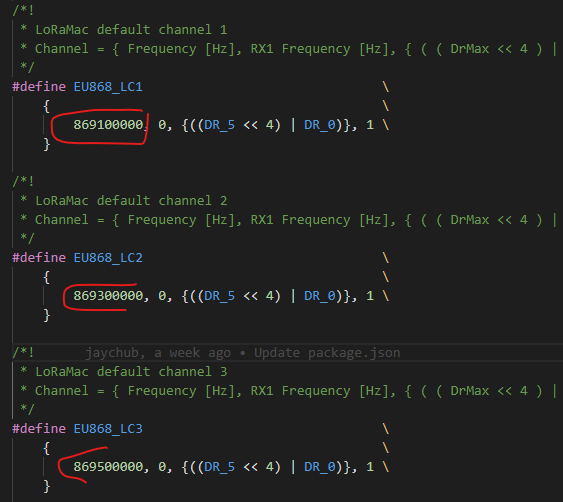 and my node is transmitting on the frequency set on LC1 to LC3 as shown below but the gateway doesn’t pick anything up:

another update: after changing the Lora Network Settings from Basics Station to Network Server, it started to see the join packets: but only join requests the accept requests are never received by the node I’m sure they are not sent on the right frequency, as i have yet to find where to set this setting:
Edit: now it works but barely, after adding an application and adding the device the join completed but only after many tries, for some reason it keeps timing out on the RX node side. so i know that i am on the right track…

just need to tweak this so it is 100% and that’s where i need an experts help. 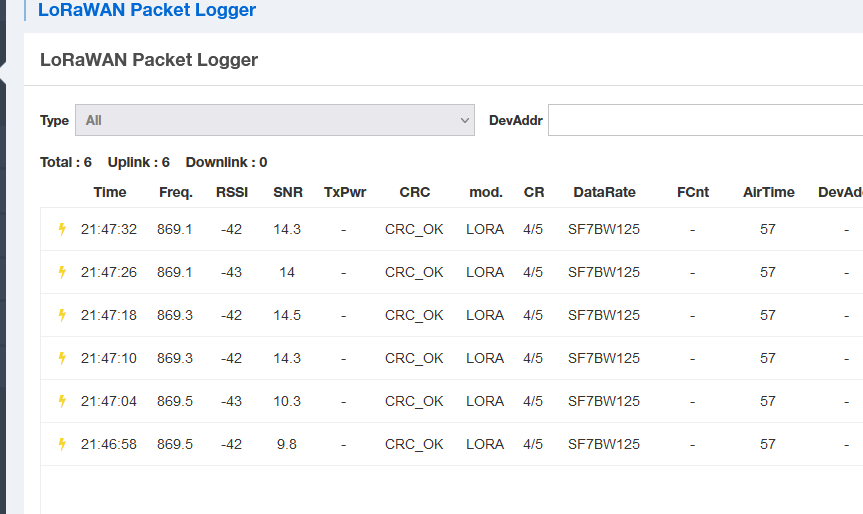 putting it back to Basics Station with TTN the Lora packet logger sees nothing again… is there a reason?

i think we have a bug.
anything i set on the Channel Plan for example, has no effect when i choose Basics Station under Lora network settings… for some reason it always defaults to the standard frequencies that are part of the chosen template which in my case is EU868 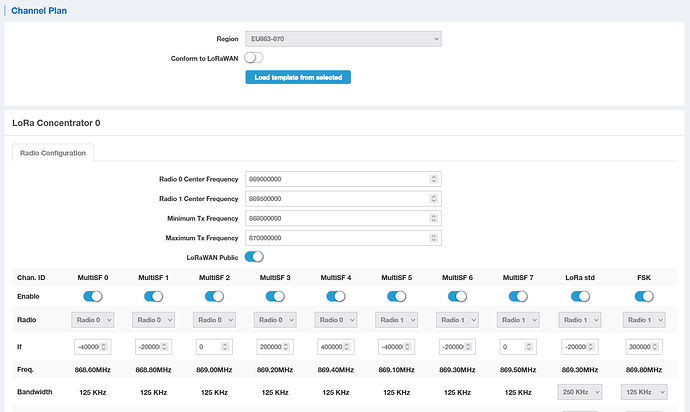 so the above has no effect when used with the below:

is this a BUG?

Thank you for your continued support.

Ideally i would like to make it work on both, but for started let’s do the Basics Station with TTN as that’s the one where i cannot even make it work.

i’m writing the firmware of the node so all those parameters are configurable, it is based on : semtech’s reference code found here https://github.com/Lora-net/LoRaMac-node/blob/master/src/mac/region/RegionEU868.h.
As far as the requirement i’ve received are based on the countries law, which apparently for the time being is restricting the use of the full LoRa EU868 spectrum until end of this year, as shown in red below:

which basically forbids the use of 868 - 869 Mhz, but they leave everything between 869-870Mhz exploitable as shown above. so that’s where i would like to configure both the node and gateway to use so we can be compliant with the law.

we know that it’s a bizarre circumstance, but the countries regulators told us that those frequencies are still being exploited by certain organizations and they are working with them to clear them for public use since they are supposed to be unlicensed, so we just have to tweak our setup until the full Lora spectrum is usable again.
So for the node channel mask, you tell me what i should use to be complaint with the above law.
my guess would be the following, but please correct me if i’m wrong:

i hope this makes sense.

Ideally i would like to make it work on both, but for started let’s do the Basics Station with TTN as that’s the one where i cannot even make it work.

If you want to go custom you’ll need your own server instance.

Ah thanks for pointing this out, absolutely true, I was just thinking of giving you the frequencies with a 125kHz bands. The server end I can’t do much about you as it is not officially supported we have not considered or implemented it as a solution.
If you look at the image you will see what field and data you need to fill in to make the channel plan fit your 3 channels. 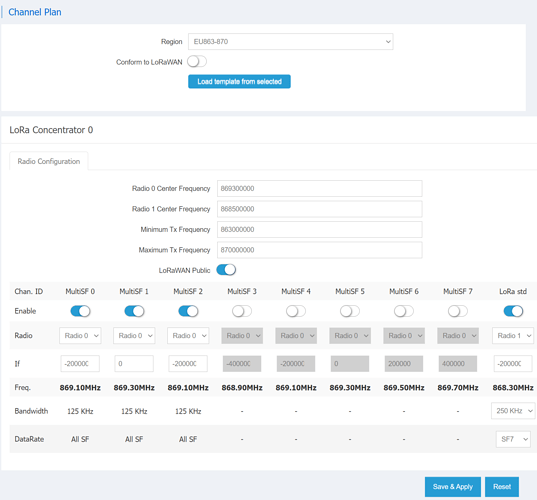